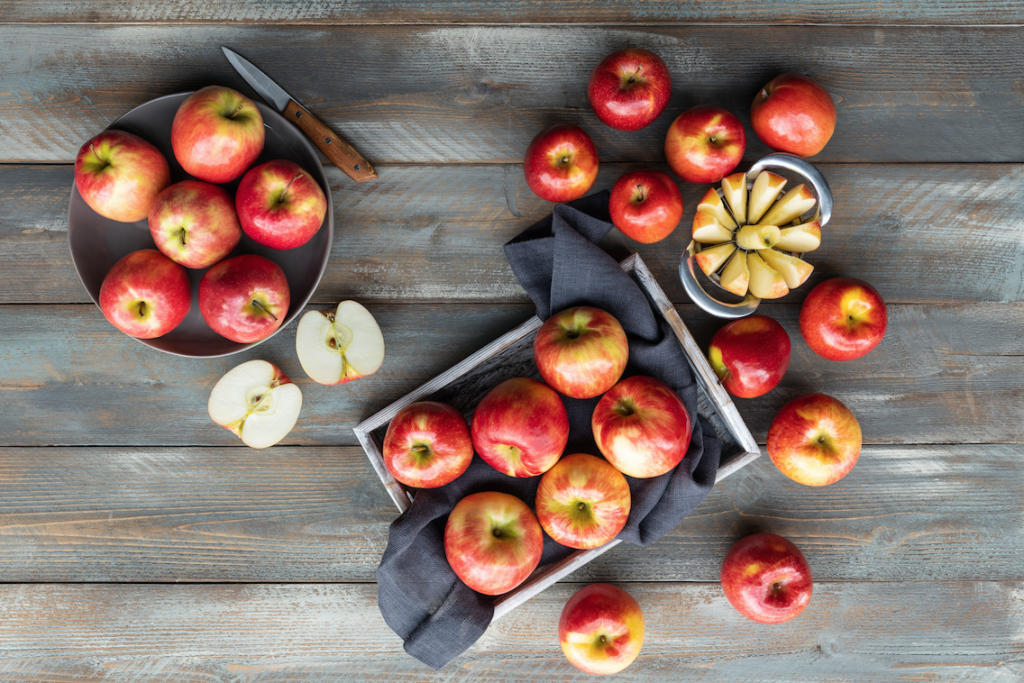 8 Festive Ways to Use Apples In Season

Apples are great for snacking, baking, and even for use with savory foods like roasted meats.  Take advantage of a HUGE Sale on apples at Safeway this week!  Get Honeycrisp Apples for just $.99/lb.

This is the perfect time to try a new recipe for apples.  See 8 delicious ways to use apples in recipes this season below.

Did you know that there are more than 7,000 apple varieties grown worldwide?  Apples are such a diet staple that the average American eats about 17 pounds of apples each year.

The top five produced apple varieties, according to the Apple Association are 1) Gala 2) Red Delicious 3) Fuji 4) Honeycrisp and 5) Ganny Smith.

While the Red Delicious apple was the top grown apple in the U.S. for more than 75 years, it was dethroned in 2018 by the Gala Apple.  Depending on the variety, apples are available year-round and are harvested from late July through November.

In addition to the five most popular apple varieties, Safeway also carries seasonal varieties like the Pink Cripps, Jazz, Sugar Bee, Ambrosia, Envy, McIntosh, Cosmic, and Koru in both conventional and organic varieties.

Fun facts and flavor profiles of the most popular apple varieties:

This variety, a cross between Kidd’s Orange Red and Golden Delicious, originated in New Zealand. The Royal Gala strain was named in honor of Queen Elizabeth II, who deemed it her favorite during a visit to New Zealand. It was brought to the United States in the early 1970s and is now one of the country’s most popular apples. Crisp, juicy, and very sweet, Gala is ideal for snacking. Galas can vary in color, from cream to red- and yellow-striped. U.S.-grown Galas are harvested beginning in mid-July and are typically available year-round.

This Australian native was discovered in 1868 as a chance seedling by “Granny” Anne Smith of Ryde, New South Wales. One parent might have been a French crabapple. Grannies are known for their distinctive green flesh – which sometimes bears a red blush – and their very tart flavor. An all-purpose apple, Grannies work equally well as a snack or in pies and sauce. U.S. Grannies are harvested beginning in August and are available year-round.

The most widely recognized of all U.S. apple varieties originated in Iowa in the 1870s. This sweet, crispy, juicy apple varies in color from striped red to solid midnight red. Western Red Delicious are elongated in shape, with pronounced “feet.” Eastern-grown Delicious is more round. This apple is best eaten fresh or in salads.

This honey of an apple has a honeyed, mild flavor and a crispness deemed explosive. Juicy and sweet, this popular newcomer is a cross between Keepsake and an unreleased Minnesota line known as MN 1627. Honeycrisp’s skin is a distinctive mottled red over a yellow background, with coarse flesh. This apple is good for snacking, salads and sauce-making and stores well. Supplies are limited but growing with harvest beginning in September.

Originally developed in Japan in the late 1930s and named after the famous Mt. Fuji, U.S.-grown Fujis began appearing in markets in the 1980s. Fuji is a cross between Ralls Janet and Red Delicious. This variety´s popularity is skyrocketing, thanks to its sweet flavor and firmness. Fuji apples are bi-colored, typically striped with yellow and red. They are available year-round, beginning in September.

Here are 8 delicious recipes to prepare with in-season apples

Mmmm…apple pie. We’re big fans of smoothies and this is one of our favorites. Apples, oats and wheat germ makes it healthy and filling. Add toppings as desired to make it suitable for breakfast or dessert.  Get the recipe here.

Any time is waffle time as far as we’re concerned. Make these savory classics for breakfast, lunch or dinner. The apples and cinnamon add some sweetness. We recommend adding whipped topping and ice cream to turn them into a delectable dessert.  Get the recipe here.

You can serve this in a bowl or pour it in a shaker bottle and take it to go! Add some protein powder to increase the protein. Wheat germ mixed in offers even more health benefits. If you dish it into a bowl, toss some oatmeal clusters and apple chunks on top.  Get the recipe here.

Warm-up with the creamy tastes of autumn with our Pumpkin & Apple Soup. Granny Smith apples bring a touch of sweetness and jalapeño adds a little heat. Pumpkin and cardamom give this soup the true flavor of fall.  Get the recipe here.

This recipe for Apple Bowls with Chicken Salad is sure to be a lunch the kiddos and adults alike will LOVE. Don’t forget to drizzle some lemon juice over the apple to keep it from browning!  Get the recipe here.

We like to grill juicy, tender pork with rich molasses and honey. Nothing complements this pork tenderloin like grilled apple disks with cinnamon. Enjoy this decadent main dish with a light, crisp side any time of year, but we especially love to serve it in Fall.  Get the recipe here.

Warm-up on chilly nights with a new take on classic apple cider. Made with raw apple cider, cinnamon, and vanilla bean, it’s a simple recipe that’s rich and creamy. Garnish with whipped cream, toasted pecans, and a cinnamon stick!  Get the recipe here.

Whether you like your apples sweet or in savory dishes, apples are a versatile fruit that can be found year-round with delicious preparation options available. 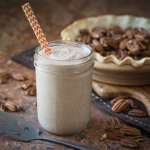 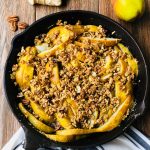