Beef Birria (Birria de Res) is a rich and flavorful Mexican stewed beef recipe that can be served as a stew or shred the beef to make the famous quesa birria tacos.  The tacos are coated in the rich consomé broth, filled with gooey cheese and shredded beef then pan-fried until golden and crisp.  Top with onion, cilantro, and your favorite toppings to make an epic Taco Tuesday.

The flavors in this beef birria recipe will blow your mind – it’s smoky, sweet, and complex.  Be prepared for juicy beef, oozing cheese and crisp tortillas that are dipped in the rich crimson stewed beef sauce before pan-frying.

You may have become familiar with Birria recently (pronounced beer-ria, with the rolling ‘r’) as Tacos de Birria and Quesa Birria have been splashed across social media, but Birria Tacos are much more than a fad.  This Tiktok craze is created from Birria de Res, a Mexican food staple from Jalisco, Mexico that can trace its origins all the way back to the 1500s.

There are as many variations of beef birria as there is Mexican beers.

Birria is a Mexican dish historically made from either goat or lamb but beef is more commonly used these days because it is more accessible.  We use two kinds of beef in this recipe – a chuck or cross rib roast and short ribs to get the maximum beefy flavor and rich consome.   If you are looking for a budget-friendly alternative, you can skip the short ribs and just use the beef roast, you’ll just have less fat and richness in the broth.

The meat is stewed until it is fall-apart juicy tender in a rich broth made from chilies, onions, garlic, tomatoes, and spices including chile, cumin, oregano, paprika, cinnamon and clove, and bay leaves. The resulting beef is deeply complex with fragrant, savory, slightly spicy notes.

Birria is commonly served at celebrations such as holidays and weddings solely as a meat stew but can also be served inside tacos or quesadillas, burritos, and nachos, and most recently, restaurants are making Birria wontons, Birria grilled cheese, Birria egg rolls, and Birria ramen, as well. 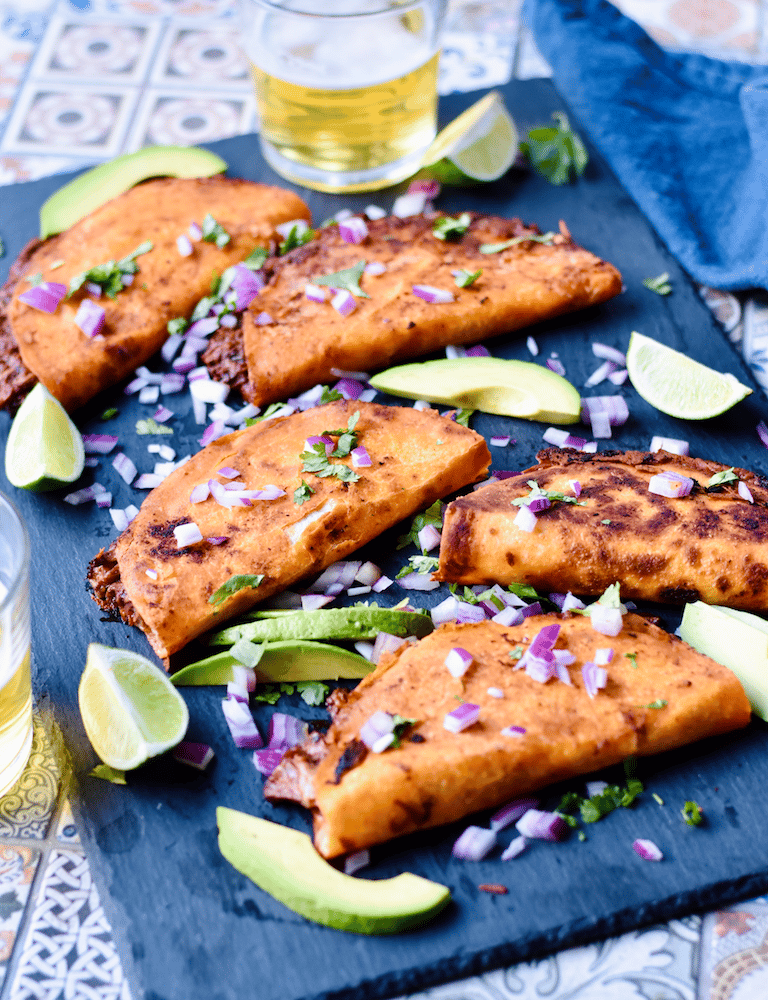 What are Birria Tacos

Birria Tacos are made of stewed meat stuffed inside a corn tortilla that’s dipped into a thin layer of fat that sits on top of the Birria broth, then pan-fried to crispy gloriousness. The tacos are topped with chopped onions and cilantro and served with a side of the leftover rich and flavorful consomé broth for dipping.

How to Make Beef Birria Tacos

Boil 2 cups of water and remove from the heat.  Add the guajillo chiles and let them soak for 15 minutes until softened.  Cut the stems and shake out the seeds before adding to the sauce.

The most important step in making beef birria is to brown the meat.  Other recipes online will have you boil the beef – and that results in a gross grey-hued beef with impurities on the top that have to be skimmed off.  So don’t boil the beef, brown the beef.  Browning the beef in a thin layer of oil adds the first layer of flavor to the beef.

Cut the roast into 2″ x 2″ pieces.  Season the beef with salt and pepper.  Heat 1 tablespoon olive oil in a large Dutch oven over medium-high heat until shimmering.  Add the chopped beef in phases in a single layer, not crowding the pan.  Brown all sides of the meat, including the short ribs.  Remove the cooked beef from the pan and set it aside on a plate.  Repeat until all the meat is browned and removed from the pot. 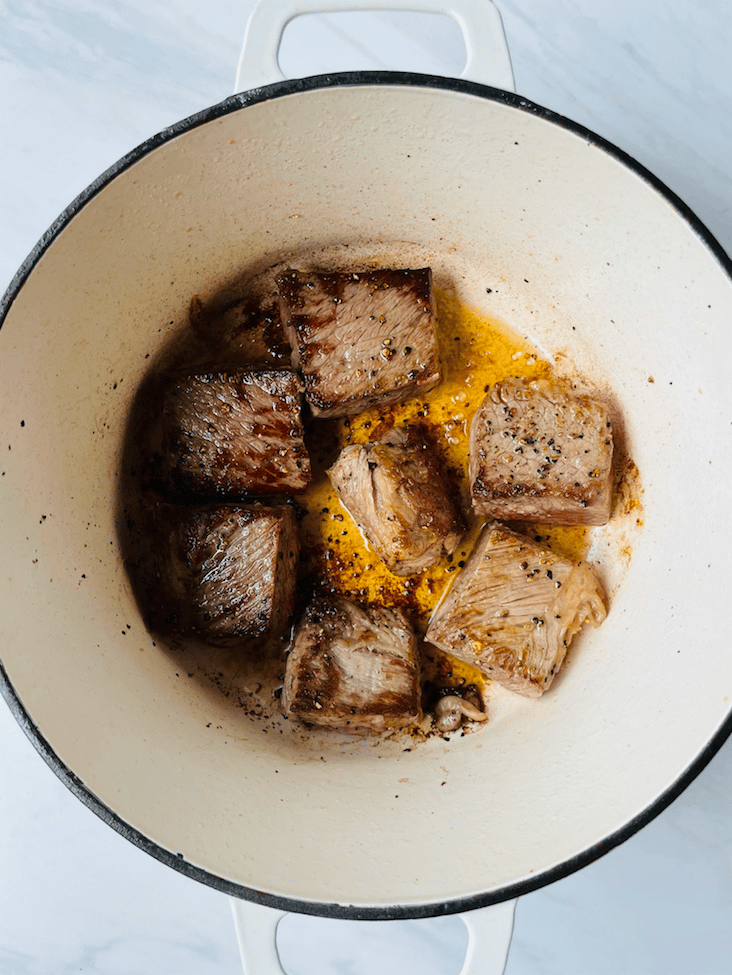 Add the chopped onions to the pot and cook until softened, stirring often – about 5 to 6 minutes.

Add the sauce along with the broth and beef to the pot and stir to coat.  Use a little broth or water to swish the sauce out of the blender and into the pot.

Cook, covered for 3-4 hours until the beef is tender and shreddable with a fork.

Crockpot- you can put the browned beef, onions and sauce in the crockpot and cook on high heat for 4-6 hours or low for 6-8 hours.  Reduce the liquid to 4 cups broth or water in the crockpot.

To make the tacos, remove the beef from the pot and shred with 2 forks.   Leave behind as much of the sauce/broth as possible.  You can also shred the beef in the pot if you are only serving it for tacos.

Heat a non-stick skillet over medium-high heat.  Dip the tortillas on both sides into the fat layer of the broth (it will be glossy and separate slightly from the sauce).  Set the coated tortillas into the hot skillet, top with shredded cheese on the whole tortilla and the shredded beef on half of the tortilla.  Fold over the tortilla side with the cheese only to make a quesadilla/taco.  Heat until golden brown, then flip and cook the other side until golden and the cheese is melted.

Top with chopped onions, cilantro, avocados, and jalapenos if desired.   If you have broth left, pour it into a bowl for dipping the tacos into the rich sauce. 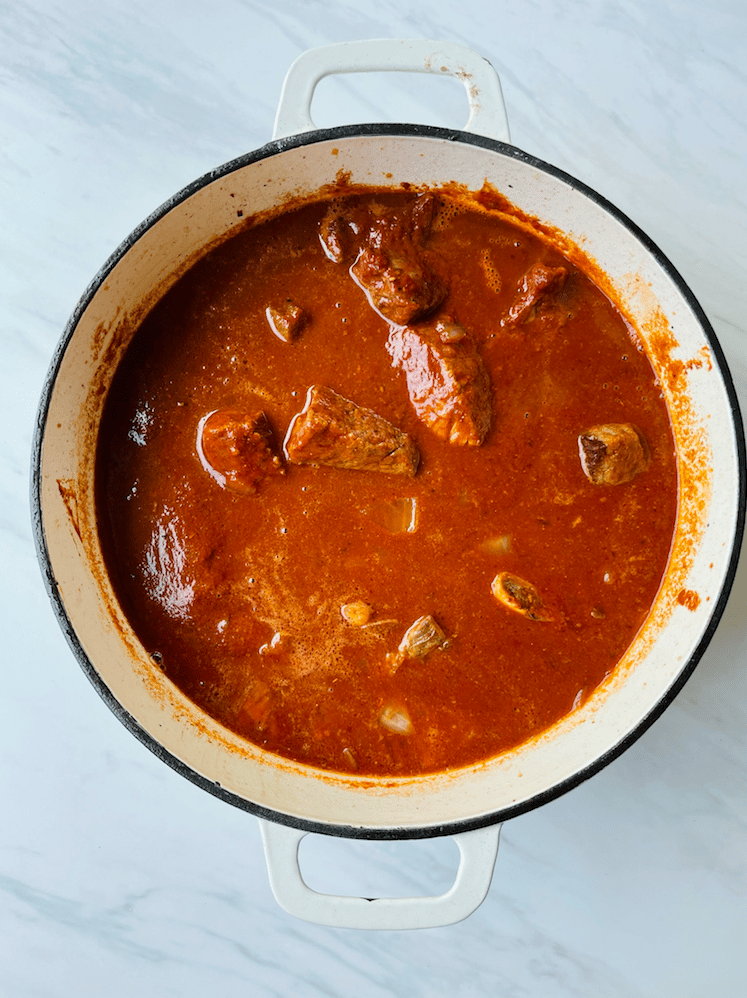 What to Serve with Birria de Res Tacos

The tacos can be served with beans and rice, a side salad, and a bowl of the rich consomé for dipping. 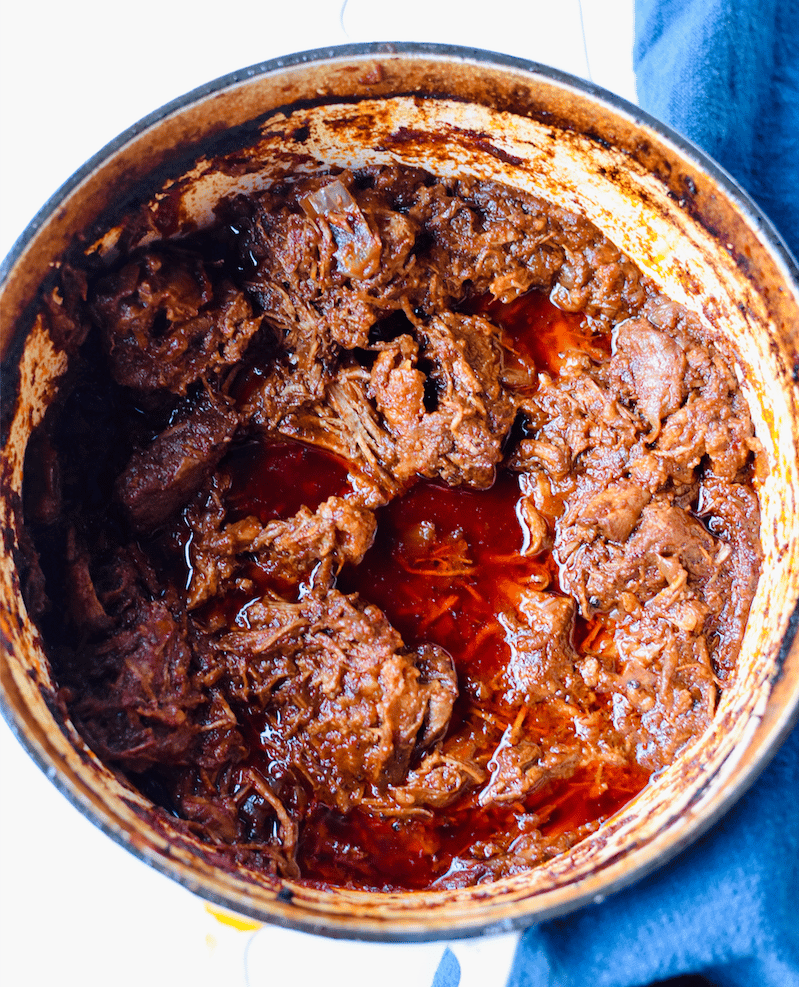 SuperSafeway is a blog devoted to helping you find the best deals and planning your meals based on sales at Safeway.

How to Make Baby Back Ribs With Perfect Dry Rub For Oven Cooked, Smoked or Grilled Ribs 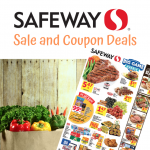 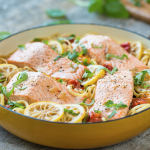 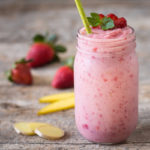